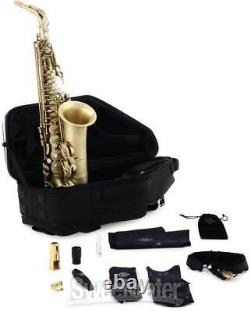 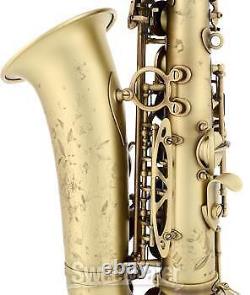 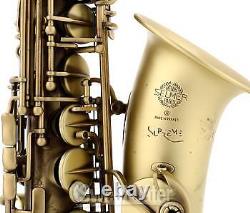 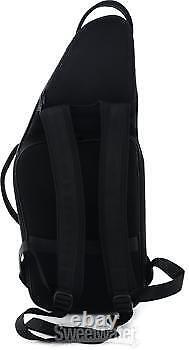 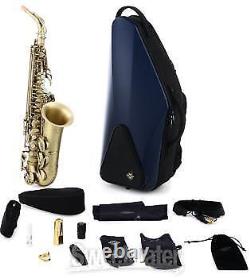 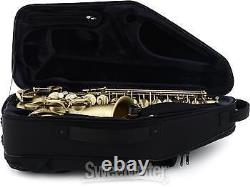 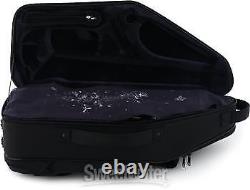 One that could ace a funk session, a symphony concert, and a jazz date - all on the same day? Behold the Selmer Paris Supreme 92DL. The 92 Supreme is the end product of an arduous 8-year development program during which Selmer Paris canvassed their key artists on their favorite characteristics of Selmer's historical benchmark instruments. "Supreme" may be a nod to jazz legend's John Coltrane's mythical album, but the glorious timbral richness that pours from this flawless instrument makes it perfectly suited to all genres. The name also references the instrument's uncanny ability to transcend musical styles, as the Supreme erases the physical constraints of traditional saxophone design, connecting the player directly and immediately to the sound.

Saxophones are marvels of complexity, and a successful design resides comfortably at the nexus of the acoustic, the mechanical, and the aesthetic - the end result of thousands of decisions. Surely, a considerable amount of information to distill into a design brief for a new horn; but Selmer Paris, drawing on their century of expertise, met the challenge by leveraging the advantages of advanced technology integrated with traditional hand craftsmanship. In the development of the 92 Supreme, performing high-tech R&D such as 3D modeling in-house enabled Selmer to push the physical limitations of the relationship between tuning, timbre, and response.

During manufacturing of the finished design, automated control over machining tools was used and 3D scanning was employed at various points in the process to eliminate inconsistencies from instrument to instrument. The results are nothing less than sumptuous: the Selmer Paris Supreme 92DL is a best-of-the-classics flagship instrument that redefines the modern professional alto saxophone.

A century of saxophone design expertise. The 92 Supreme represents a pivotal moment in saxophone evolution. Its deep gold lacquer finish hearkens back to Selmer's mid-century classics - and so does its richly opulent sound. Remaining true to their iconic designs while isolating and combining the best-loved characteristics of those coveted horns, Selmer Paris set out to re-engineer the physics, ergonomics, and aesthetics of their new instrument. The Supreme's newly tooled bell shape optimizes intonation and the production of low notes, while a new neck bore taper improves timbre, the intonation of octaves, and overall response. A major keywork design overhaul ensures confident, accurate fingering for enhanced performance of challenging passages. To that end, the key heights have been optimized for light, fluid action and economy of motion, and the shapes and placements of the side keys have been redesigned to facilitate smooth movement from one to the other. The treated leather pads are fitted with rivetless metal resonators, adding the perfect amount of brightness to your every note. In the Supreme 92DL, Selmer modified the diameters and locations of tone holes (including reducing the diameter of the low Bb and B sound holes) for improved intonation. They tweaked regulation by the inclusion of a direct arm between the right-hand F and F# keys. They have also incorporated the C# correction system from the Series III, which stays open to allow the C# to ring true in the middle octave, while closing to keep the top C# from going sharp, so you no longer have to adjust your embouchure to keep these notes in tune. A shorter-action octave key mechanism uses Teflon in the sockets for smooth actuation. A hinged toggle on left-hand pinky table keys gives you greater ease of movement from one key to another. The neck receiver socket is fitted with an adjustable, 3-point concentric clamping ring, providing a robust, user-friendly neck-body connection.

All these enhancements, and more, make the Supreme a saxophone that is remarkably natural and easy to play. Everything falls intuitively under the fingers in a free-blowing design that faithfully voices your musical intent with rich expressiveness. Supreme aesthetics, handcrafted in France. One cannot gaze upon the sleek lines, softened angles, and elegant mother-of-pearl key touches of the 92 Supreme and not be enthralled by its jaw-dropping visuals. From its luxurious dark gold lacquer finish to the exclusive, delicately detailed engraving that runs from the bell all the way up to the neck join, there is, quite literally, nothing like the Supreme.

The engraving design evokes the genesis of its sound in a lyrical dance of the traditional floral with cubes representing the structure of the metal molecules, swirling together in an explosion symbolizing the projection of air, motion, and speed. The planetary disc in the background suggests the concept of infinite space.

The Supreme is certainly a fitting instrument to mark a century of Selmer saxophone design. It possesses all the beloved qualities of the cherished models that preceded it, satisfying the desires of contemporary professional saxophonists. It transcends musical genres with its superbly balanced accuracy, infinite range of tonal colors, and poised ease of response. Its timbral roundness and wide range of projection make it an instrument that is at once undeniably classic and decisively modern. Bottom line: the Selmer Paris Supreme 92DL is an exquisitely designed professional alto saxophone that will nurture and advance your continuing development as an artist.

The Selmer legacy of quality and innovation. As all modern saxophone designs are based on the Selmer platform, it's instructive to take a look at the company's history to understand its considerable influence on the instrument as we know it today. Conservatory-trained clarinetist Henri Selmer founded Henri Selmer Paris in 1885. Fashioning reeds and mouthpieces in his small workshop, he soon took on instrument repair and modifications, which eventually let to the design and manufacture of clarinets.

In 1900, Selmer opened a retail shop in New York (the beginnings of Selmer USA). In 1922, Selmer introduced its first saxophone: the Model 22.

In the ensuing decades, Selmer released industry-leading designs such as the Balanced Action, Super Action, Mark VI, and Reference 54, which have set the standard for what a modern saxophone should be. Listen to any iconic jazz recording by John Coltrane, Sonny Rollins, Paul Desmond, (late period) Cannonball Adderley, Wayne Shorter, Michael Brecker, Branford Marsalis, or Joshua Redman, and you will hear one of these legendary horns in action. Delivering exceptional value at every level, from student to professional, Selmer USA and Henri Selmer Paris offer a full line of woodwind and brass instruments.

The seller is "sweetwatersound" and is located in this country: US. This item can be shipped to United States.